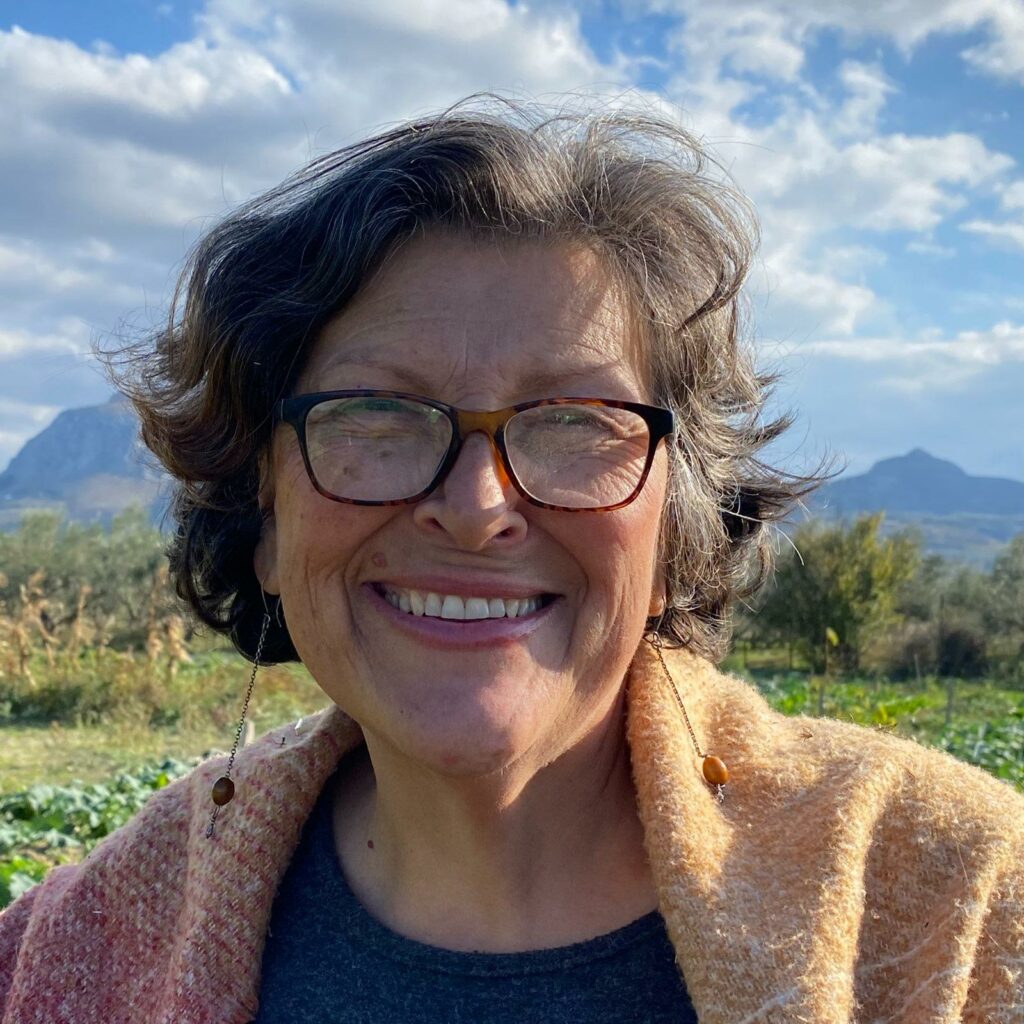 Since she was young, she was taking care and loving plants and especially herbs. Her professional work started three years ago when in the mountain village of Pyrgos, situated in the foothills of Mavro Oros in the municipality of Xylokastron-Evrostini in North Peloponnese and on an altitude of 650m, she acquired almost two acres of land. In one of them, she grows herbs and in the other one olive trees, walnut trees, fruit trees and a part of it she maintains as a forest.

Her passion for natural and biological cultivation led her to choose the organic way. The seedlings are bought from a special bio-garden and the soil was weeded and tilled using mechanical means. Afterwards, the seedlings were hand-planted and since then she grows her herbs while her cultivation is certified as biological by a company named DIO (www.dionet.gr). All her plants grow without fertilizers or pesticides or weed killers. Herbs don’t generally need irrigation, except for lemon balm.

She cultivates her fields on her own. Weeding and harvesting are done by hand so the essential oils remain in the plants. The harvested herbs are then tied in bunches and hung in dark and well-ventilated room to dry naturally and maintain their colour and flavours. Dried herbs are stored in cotton sacks in a cool and dry place. Before their delivery to customers, leaves are removed from their woody stems by hand. All products are packed in airtight paper bags suitable for food and packaging is also certified by DIO.

“I guarantee my customers that cultivation and handling of herbs are done with great attention and love and quality control is carried out at each stage of production. Since aromatic-medicinal plant users are always looking for the best quality to enjoy all their benefits, I must offer them only the best quality.”

A Thessaloniki native, Antonis settled down in Lecheo in 2010 when he returned to Greece after he spent several years traveling and working with NGOs in Central and South America on agroecology project development. He rented fruit farms in Assos and Lecheo, while cultivating an organic vegetable farm next to his living place.

His fruit farms are located in Assos and Chrissoula, his vegetable in Lecheo a short distance from his home 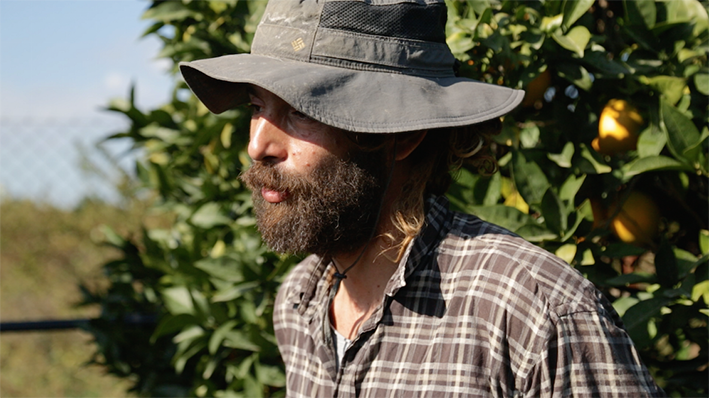 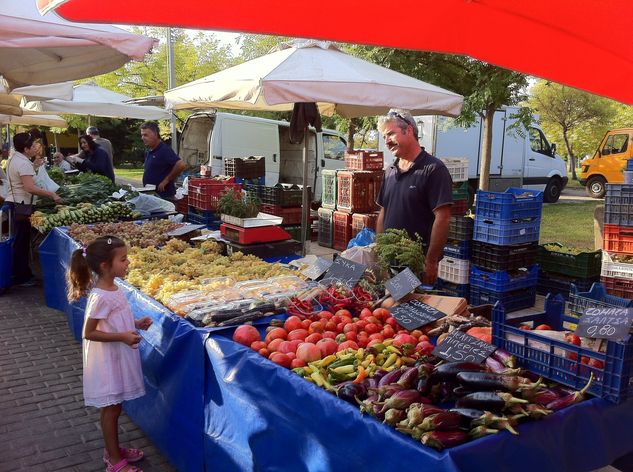 After his studies in Australia in the 1980s, Vangelis returned to Greece where he took over the management of the family farms in Lecheon, Corinth. Upon continuing the tradition of cultivating conventional produce for a few years, he felt that this method was leading him to a dead end.

Vangelis decided to switch to organic farming in the early 1990s, a decision which proved to be both personally and professionally satisfying and rewarding. During this period he met Panos Manikis and Giannis Varelas who introduced natural farming to Greece and Europe. This was part of the reward. Vangelis participated voluntarily in many events organised by Panos and Giannis, such as sowing clay balls in areas devastated by fire or in school fetes in Lecheon high school as well as other high schools around Greece. Young students were also supported to sow and grow heirloom vegetable and fruit varieties. The aim was for the young to connect traditional knowledge and methods with people’s needs. Every year on Palm Sunday students would distribute the plants to visitors, promoting and disseminating their knowledge to the wider community.

His farms and vineyards are located in Lecheo.

Giorgios, now in his fifties, is the son of farmers he started working at his family’s farm after graduating high school.

Continuing after his father he went about farming in the conventional way of synthetic pesticides and fertilization.

As time went on he started to really notice the difference between the homegrown vegetables of his youth and the way vegetables were now being produced which lead him to biological cultivation after his meeting with Aris.

His farmlands are located near the village of Assos under the rock of Acrocorinth. There he cultivates lemons, apricots and grapes which are later turned into grape molasses and raisins. 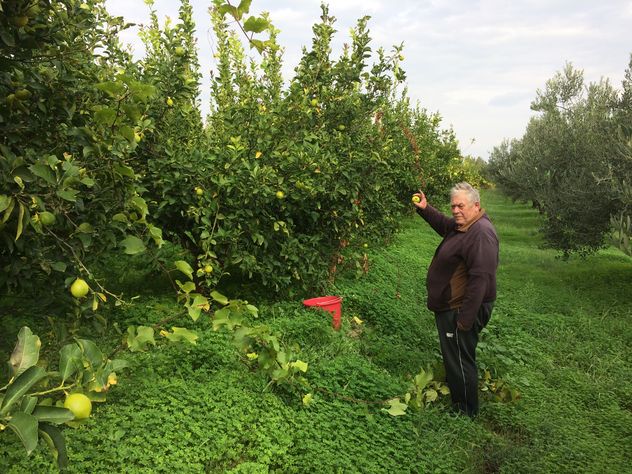 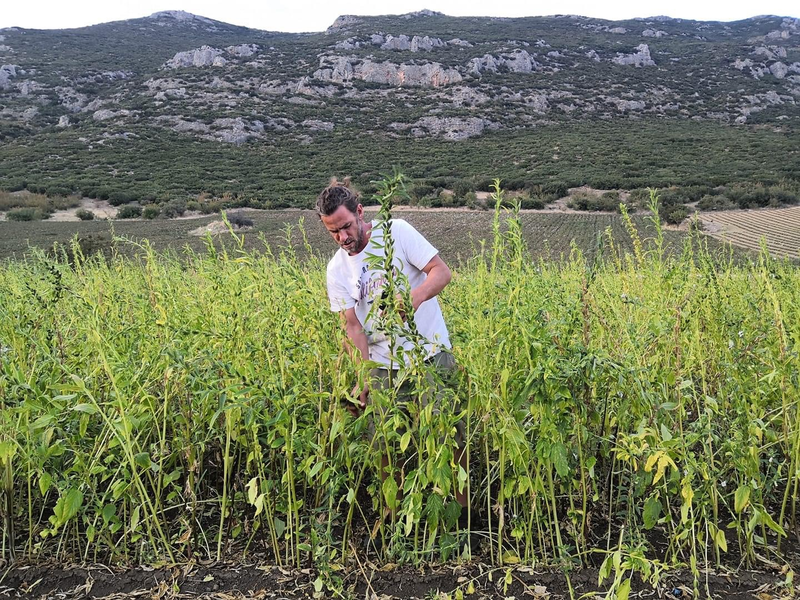 “I come from a rural family and so when in 2004 when I finished my studies and obliga ons in the army I started working professionally in agriculture. In the beginning I con nued what my father did, with arable crops such as co on, corn, cereals and animal feed, but at the same me, little by little, over the years I became involved in organic farming.

Now I have created my own organic farm ‘Tysanos’ (Θύσανος) and I grow plants such as sesame, cereals, industrial hemp, lavender, and some animal feed and in some of them with local traditional varieties.

I am a member of the Social Coopera ve Enterprise ‘Cannabio’  and also a member of the cul va on group of AEGILOPS – Network for Biodiversity and Ecology in Greece. I am involved in organic farming because I believe it is the only way to better food, and a better environment.

I cultivate a traditional variety of sesame (brown sesame) since 2012. The cultivation is a marriage between traditional and modern techniques. Harvesting we do by hand, we cut the sesame while still green and make into bails that are stacked standing in the sun to dry. After they dry, we shake them on cloths by hand, then the seed is cleaned of foreign matter and goes for grinding. This was we assure the best quality for the sesame seeds. The processing is done in a partner in Athens, it is washed, roasted at a low temperature at
60 degrees and ground in a stone mill, with its bark and it becomes wholemeal tahini. All with the standards of organic production and processing. It is controlled and certified by BioHellas.”

Dimitris is a 65-year-old retired electronician and work for 32 years for the Greek Telecom Company. He has been working on the family fields since he was 7 years old and he continued working them in parallel with his job as an electronician. Since 2012 Dimitris’ sole occupation has been his orchards in the area of Vocha, consisting of citrus trees, olive trees and avocado trees.

He got into biological cultivation in 1997 after seeing the wells that provided fresh water for his community become polluted from fertilizers. He sees this way of cultivation not only as a way to provided people with produce that have less chemicals that might impact their health but as a way to protect his environment from needless harm.

His farms are located in Sikia. 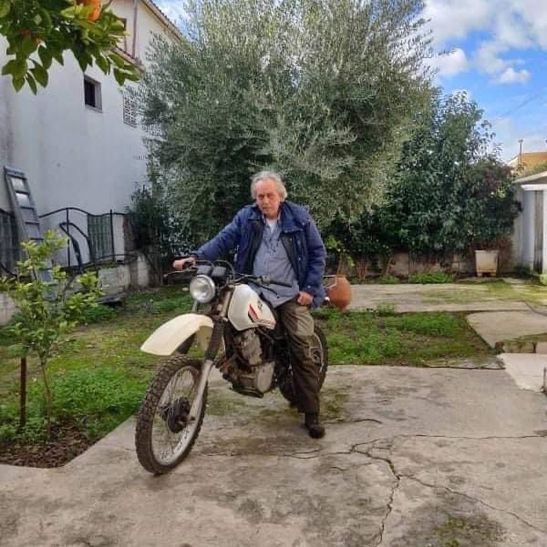 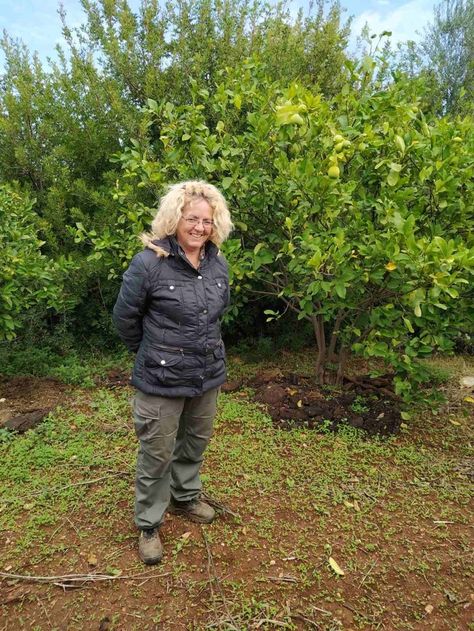 Marina and Vassilis are partners in both life and work. They live in the island of Naxos, in the Cylcades, Greece.

Vassilis abandoned a job of civil engineering to become an organic farmer and Marina used to work in France in popular and environmental education.

They both came to the uses of plants for the necessity to reconnect with the therapeutic uses of plants, first for themselves and then turned a common interest into a professional project. They acquired their skills and knowledges about herbs by self-teaching, seminars, and from persons who shared their knowledges with them. The plants are wild-harvested by hand in selected areas in Naxos and Peloponnese, as far as possible from any kind of pollution and urbanized areas. The collect of the herbs is done, as much as possible, according to the moon calendar.

The distillations are done in a small stainless steel still and the essential oils are then stored in dark glass bottles. 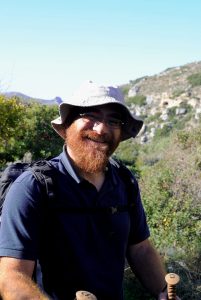 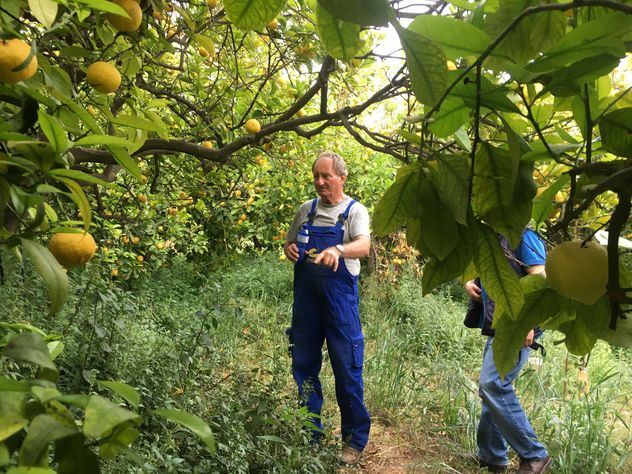 “I am a professional beekeeper specialized in the processing of beekeeping products. From an early age my love for bees and nature led me to follow this career.

Me and my family we own a small production unit of about 250 bee herds. I am collecting honey from a variety of blooms all over Greece depending on the ecosystem.
My major concern is the quality of the product without  neglecting the bee care.
My involvement with beekeeping led me to the production of natural cosmetics that in its composition includes beekeeping products. I have attended numerous seminars in private and public bodies related to my subject and I have a certification of manufacturing natural cosmetics from the Kapodistrian University of Athens.
I produce all beekeeping products I use in my preparations from my apiary.
I am a beekeeper instructor and I have delivered seminars regarding natural cosmetics, soap and beekeeping products processing at the School of Agriculture Peloponnese as well as in beekeeping associations.“ 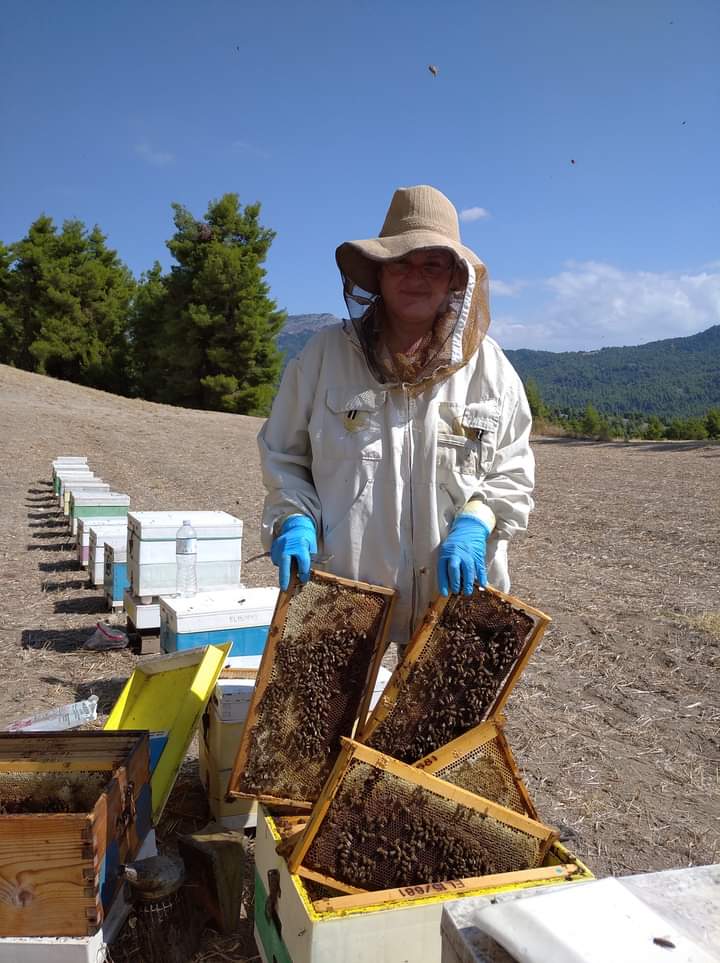 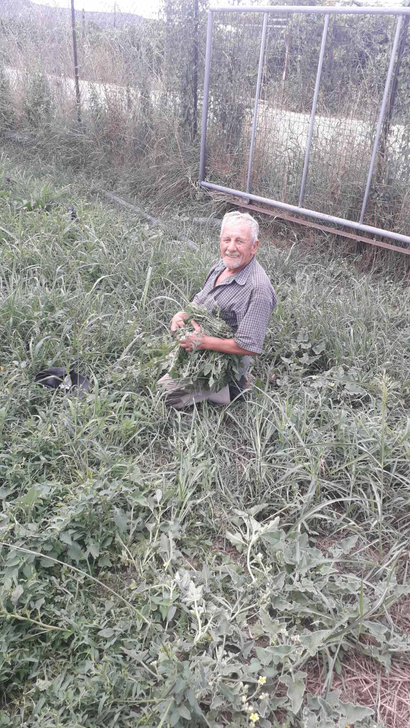 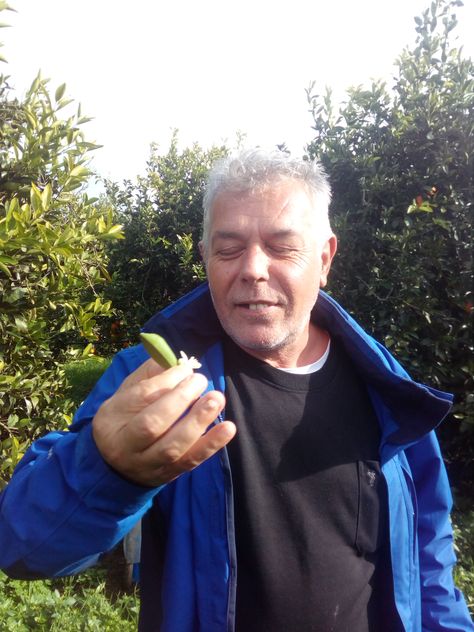 Tasos, an organic famers since 30 years in his fifties, is one of the big player on the citrus organic market in Greece.

After he went broke in the early 2000’s, he worked as the man in charge for a wholesaler until he could start fresh again with citrus farming.

He cultivates about 14 hectares spread on 35 different plots located in the region of Argos, one of the 3 main citrus areas in Greece, a little over 30 minutes from Lecheo.

He can be considered as a visionary farmer, both for the long term cultivation strategy he designed and implemented (he picked different varieties on the same plot, alternated them, and planted new trees between old ones, and pruned the old ones carefully to give the new ones enough space and light, with a view to graft later the old ones) and for his fertilization methods (he sprays his trees with a mixture of decomposed algae he finds in his water tanks and fish he leaves in there to decompose).

A jolly and energetic character who always makes himself available and saved Koinobio more than once, bringing mandarines and oranges at the last minute when the initial plan went off 🙂 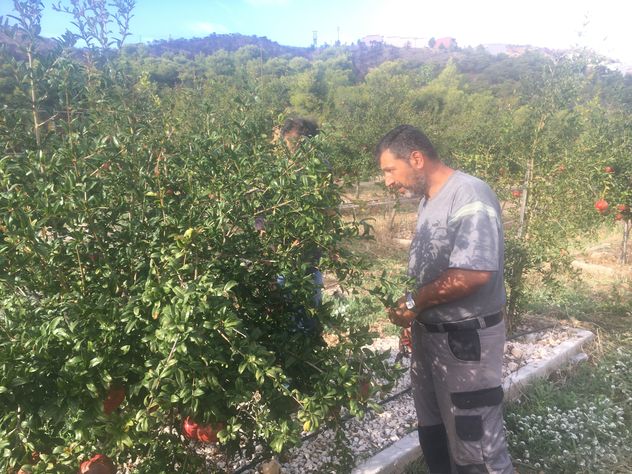 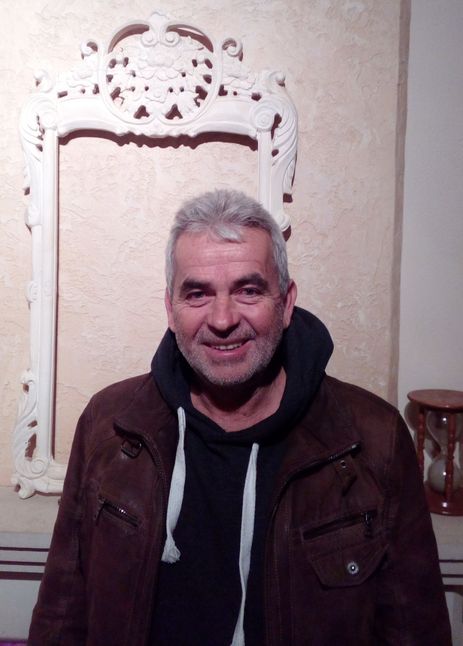 From a farming background, Ioannis, now in his fifties, has always stayed clear of chemical farming.

He cultivates Manaki and Koroneiki olives, taking good care of 1300 trees in total, located in over 15 plots in Athikia. His whole production is pressed into oil, for which he won in 2018 the Olympia Health and Nutrition’s Award Committee, the gold standard of excellence for high phenolic extra virgin olive oil.

He has been cooperating with Koinobio since the very beginning, he is the first farmer that brought us Manaki olive oil and got us hooked from the start 🙂

We are a group of young and small olive oil producers whose passion for our land and its products brought us together. We live in the Southwestern part of Messenia Peloponnese and try to combine traditional and modern farming methods but always with respect to the environment. Actually one could say that our vision is to help through fresh and green ideas to create a better one!

“Apo kardias” (Eng. from the heart) is a Greek phrase that is used to characterize everything that is made full-hearted and we chose it because we believe it reflects both our products and efforts.

We strongly believe that working as a team is a way to honor our roots and share the gifts our land can offer with the rest of the world. 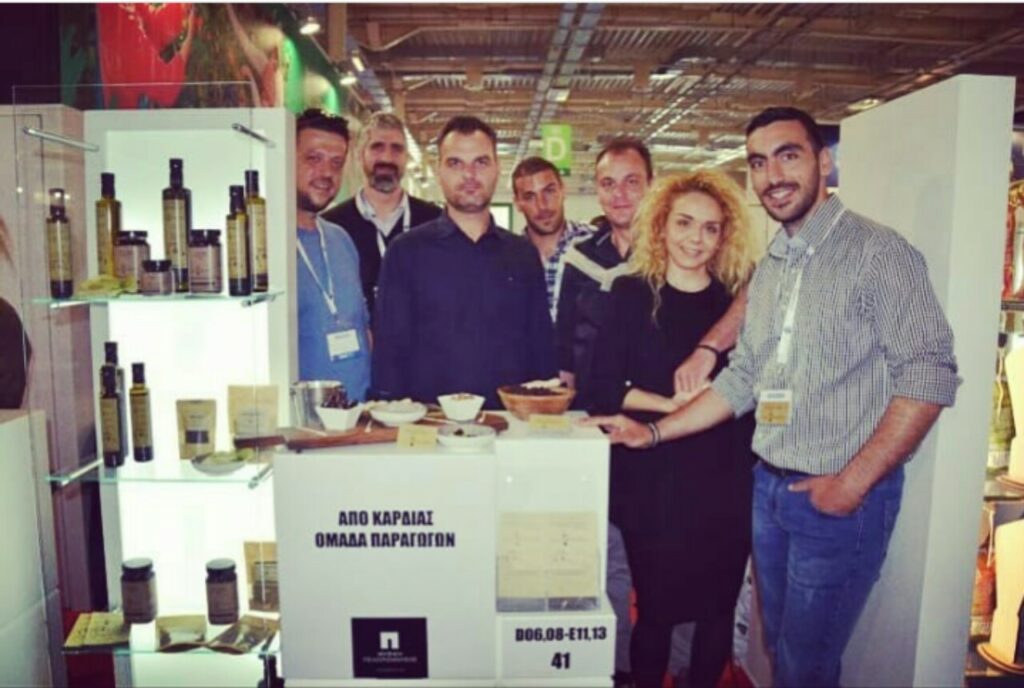